'We must do the impossible’: Cuomo says Michael Bloomberg will fund $10M coronavirus tracking program

The billionaire ex-mayor will fund a $10 million initial plan to trace people who test positive for the deadly virus, a key hurdle to safely reopening the state.

“You have weeks to get this up and running. It’s a super-ambitious undertaking," Cuomo said. "And Mayor Bloomberg will help coordinate the entire effort.”

A statewide random testing effort is working to identify what share of New York’s population is infected with coronavirus. The tracing effort will track people across county and city lines.

Cuomo suggested that up to 10% or more of the city’s population may have been infected.

“How could you possibly trace a million people? You can’t. You do the best you can,” he said. “But for every person you isolate ... that’s one less person walking around infecting another 10 people.”

Dave Goldiner is a political reporter at the New York Daily News. A 30-year newsroom veteran, he believes he is the only reporter to cover both the Sept. 11 terror attacks and the death and funeral of South African freedom icon Nelson Mandela on the ground. 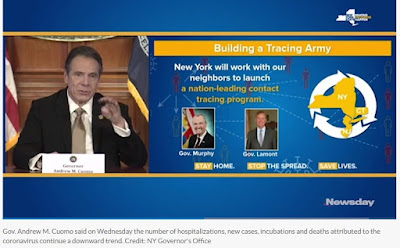 New York will launch what Gov. Andrew M. Cuomo called "a significant operation" to test the state's residents, trace back the contacts of those infected with coronavirus and isolate people who may have been exposed to the virus, as an effort toward exiting from crisis mode.

Cuomo said at his daily briefing Wednesday that former New York City Mayor Michael Bloomberg "has volunteered to help us develop" the program for the state, a multifaceted effort that will require cooperation with the neighboring states of New Jersey and Connecticut — and will also need to intensely focus on the downstate area of New York City, Long Island and Westchester County where the COVID-19 virus has hit the hardest.

The state will starts with about 500 people tracking down cases and build from there an army of tracers that will include students in the medical professions recruited from the CUNY and SUNY school systems, Cuomo said.

A Cuomo aide said during the briefing that Bloomberg's own contribution to the effort would be "upwards of $10 million."

The state will also seek to double its testing capacity, a tall order that will require running the lab machines processing those tests seven days a week and around the clock, Cuomo said.

“This entire operation has never been done before, so it’s intimidating," Cuomo acknowledged. "...We’ve just never done this … and never near this scale, so it is an intimidating exercise, but I say so what, who cares? … It’s what we need to do now.”

Cuomo said the program had to be far reaching across state lines, and spread across areas like downstate, because people go across local boundaries, potentially exposing others outside their place of residence, “so all those interconnections, if you are going to do these tracing operations, you can't do it just within your own county” because “you are going to run into people who are cross-jurisdictional.”

Hospitalizations due to coronavirus declined again across New York, with a net decrease in patients, even as more than 1,000 people were admitted for treatment, the latest state figures show.

Intubations declined and the daily death count was lower than the previous day at 474 days, but Cuomo said the “number of lives lost is still breathtakingly painful" even though deaths appear to be "on a gentle decline.”

Hundreds of thousands of coronavirus tests will also be administered daily in New York City, Mayor Bill de Blasio said earlier, as part of a "Test & Trace" program he said would begin to ramp up next month.

Tens of thousands of people who test positive could be kept in isolation at any given time, de Blasio said Wednesday.

"It's the only way we drive this disease back," de Blasio said, speaking at his daily news conference online. He said public buildings would be converted to testing sites.

Under the program, city workers, a corps as big as 5,000 or 10,000, would seek to identify whomever an infected person has had recent contact with.

De Blasio said the city does not yet have the components of the testing kits and is trying to acquire them.

For people who cannot be isolated without staying away from others in a household, the city would provide a hotel room, with food service, laundry and health care, along with transportation to the isolation site, the mayor said.

Number of patients on the decline

Northwell Health said Wednesday it has 2,443 COVID-19 patients at the 19 hospitals it owns and operates, including 11 on Long Island. That's down 95 patients from the prior day. It's also the fewest number of COVID-19 patients it has had since April 1.

Northwell added that if the pace continued, Friday would fall to the lowest level since March.

LIJ-Forest Hills in Queens, at 97%, has the highest ICU occupancy rate at Northwell.

NYU Langone in Manhattan, which runs NYU Winthrop in Mineola, said it too has seen the number of COVID-19 patients fall about 33% systemwide to about 950.

Brotman, in an interview Wednesday, said Long Island also is headed lower, but is about a week behind Manhattan and Brooklyn.

An additional 481 people died of the coronavirus in New York Monday, Gov. Andrew M. Cuomo said Tuesday — the second day in a row when the daily death toll was below 500.

The number of hospitalized COVID-19 patients fell Tuesday for the eighth straight day, to 16,076 from a high of nearly 19,000. The number of intubated patients — the most seriously ill — had the biggest one-day drop to date, falling by 127.

And the number of newly admitted coronavirus patients remained at about 1,300 from the previous day, but that was down from about 2,000 four days prior.

In Nassau, County Executive Laura Curran said Tuesday that hospitalizations “continue to go down," dropping by 44 patients, for a total of 1,999. Use of ventilators dropped by 12, for a total of 458. Another 402 residents tested positive for coronavirus on Monday.

Suffolk County on Tuesday had 492 new positives, for a total of 28,154 confirmed coronavirus cases, and 29 deaths of residents Monday for a total of 888.

Long Island has lost a total of 2,278 people to the virus, while the death toll statewide reached 14,828.

With Matthew Chayes and David Reich-Hale.

Check back for updates on this developing story.
By Newsday Staff
Posted by Betsy Combier at 10:21 AM