The NYCHA Scandal and Coverup 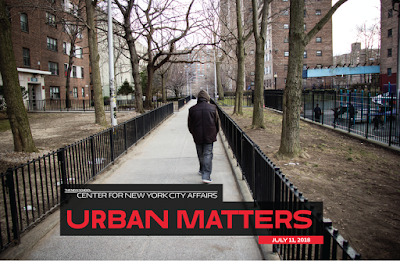 Transgression followed by cover-up: This all-too-familiar scenario has played out again, this time in the disgraceful and high-profile failures to protect New York City public housing residents from decrepit and dangerous living conditions. Urgent repairs to the buildings, and restorations to the integrity and reputation, of the New York City Housing Authority (NYCHA) are now clearly in order.
The far-reaching civil legal settlement City officials struck last month with Federal authorities laid out why in distressing detail. It confirmed failures and falsifications between 2010 and 2016 in lead paint inspections that endangered the health of children living in NYCHA developments and that occasioned a suit by tenants. It also documented a widespread, appalling pattern of neglect and deceit concerning repairs and abatement of apartment mold, failing furnaces, and other unsafe conditions.  A follow-up seizure of records and other items at a NYCHA office in Queens suggested that a separate criminal investigation may be underway, too.
NYCHA’s more than 400,000 public housing residents have long sounded alarms about worsening conditions in their apartments and buildings. The Community Service Society’s 2014 report Strengthening New York City’s Public Housing: Directions for Change was the first to systematically track the accelerated deterioration residents had experienced since 1999 and identify government disinvestment—at every level of government—as a root cause of these problems.
The consent decree settling the tenants’ lawsuit commits the City and State governments to some $4 billion in additional funding for repairs at NYCHA over the next four years that are to be overseen by a court-appointed outside monitor. Unfortunately, reporting last week on NYCHA’s state of disrepair showed that the housing authority still lacks more than $20 billion to pay for essential fixes and improvements. To raise that kind of money, NYCHA needs to shore up its badly damaged credibility with potential funders, as well as with its long-suffering tenants.
That can start by providing tenants something they’ve long been denied: Clear, publicly accessible information about progress, or lack thereof, in responding to their complaints about conditions and unmade repairs. Here’s our advice to City leaders, including Stanley Brezenoff, the housing authority’s new interim chair, for how to show that NYCHA is at last replacing a culture of cover-up with a commitment to transparency.
For example, today any tenant in a private multiple dwelling can call the 311 Citizen Service Center to register a housing complaint. The complaint—its date, location, and nature—is recorded and referred to the New York City Department of Housing Preservation (HPD) division of code enforcement for appropriate follow-up and, as necessary, an inspection.
That’s not been the case, however, if you live in public housing. A resident of a NYCHA development who dials 311 is instead automatically referred to the authority’s internal Centralized Call Center, which passes the complaint on to the development’s on-site manager. No record of the complaint is made outside NYCHA; much is left to the discretion of the manager.
In short, right now what happens in NYCHA stays in NYCHA, with no external records of complaints and outstanding violations that can be used to assess conditions and management responses. But daylight, as always, remains the best disinfectant—especially in ending the kind of deceptions NYCHA has practiced to hide building disrepair, including literally papering and painting over holes in apartment walls in advance of outside inspections. For that reason, NYCHA residents should be given access to the 311 Citizen Service Center and the City’s code enforcement system.
Similarly, any tenant in a private multiple dwelling can go to the public websites of HPD and the Department of Buildings (DOB), enter his or her address, and obtain a record of past code violations and whether and when they were cured. If a NYCHA resident enters an address, however, he/she will find no record in these data bases. NYCHA has enjoyed an exemption from these open records—but it has clearly forfeited its right to this so-called “gentlemen’s agreement.”
At the Community Service Society, we strongly recommend that NYCHA apartments and buildings be included in the public data bases maintained by HPD and DOB. Doing that will signal a welcome commitment to re-establishing NYCHA’s once-proud but now badly tarnished reputation for administering “public housing that works”—and to providing NYCHA tenants the safe, decent housing they deserve.
Posted by Betsy Combier at 9:42 PM No comments: