Mayor de Blasio’s office arranged for a nonprofit fund to loan $1.36 million to four private pre-kindergarten programs too troubled to get city contracts. Now it wants to use taxpayer money to repay the loans.
Education watchdogs say the mayor side-stepped procedures that guard against waste and abuse by asking the Fund for the City of New York to finance the faulty pre-K vendors.
“It’s like using a slush fund to avoid their own procurement rules,” said Patrick Sullivan, a former member of the Panel for Educational Policy, which votes on Department of Education contracts.
The moves come amid charges that the mayor created another nonprofit, Campaign for One New York, as a political slush fund to finance his agenda. In a probe revealed Friday, the state Board of Elections found that de Blasio and his top aides used the nonprofit to ­illegally raise money for fellow Democrats.
The 50-year-old Fund for the City of New York created an interest-free-loan program in 1976 to provide cash to nonprofits waiting for money from approved government contracts. In this case, the city gave a green light for pre-K programs to accept kids last school year despite problems including tax evasion, misspending public funds and failure to hire sufficient qualified staff — a move Sullivan called “irresponsible.”
Other critics agreed.
“It puts the taxpayers’ money at risk and it puts vulnerable children at risk,” said Leonie Haimson, an education advocate with Class Size Matters and a DOE budget watchdog.
In a rush to expand de Blasio’s signature Pre-K for All initiative in 2014-15, the Mayor’s Office of Contract Services asked the Fund for the City of New York to give “bridge loans” to the four vendors to pay teachers and other expenses pending the background stamp of approval:
·         Church Avenue Day Care in Brooklyn, whose program cost $768,676, did not file city corporate tax returns from 2010 to 2014, which disqualified the vendor. Phone numbers listed for the company were out of service Friday.
·         B’Above WorldWide Institute in Richmond Hill, Queens, loaned $330,050, failed to fix problems with oversight, staffing, rec­ords management and curriculum, records show. A representative did not return a call.
·         Footsteps Childcare in Brooklyn, loaned $133,840, was accused in 2008 of “numerous instances of failure to demonstrate that it had spent monies properly” under a former contract with the state Office of Children and Family Services. It reimbursed $64,000 of $100,000 the state found misappropriated. “I don’t want to talk about it,” Footsteps ­Director Monica McDonald said Friday.
·         West Harlem Community Organization, loaned $130,000, owes state and federal taxes and has not yet settled with the IRS. In addition, the city Health Department shut down a pre-K class it was running under the Administration for Children’s Services for failure to hire qualified teachers and do background checks on some staff. The ­issues were fixed and the program reopened last July 1, representatives said.
The DOE has since dropped all four pre-K providers. Now it plans to ask the city Comptroller’s Office to retroactively approve contracts with the vendors so taxpayer money can repay the Fund for the City of New York for its bridge loans.
Experts called the unusual request an ­end-run around the rules.
“We will review these contracts when they are submitted,” said comptroller spokesman Eric Sumberg.
The DOE says taxpayers should foot the bill even though it found the vendors “nonresponsible” and lacking the required integrity to win contracts.
All pre-K providers undergo a “rigorous review process” and strict oversight, said DOE spokeswoman Toya Holness, adding that performance or safety problems can result in immediate suspension or eventual termination.
“All families can rest assured their child is in a safe and supportive learning environment,” Holness said.
Posted by Betsy Combier at 11:33 AM No comments:

If the powers that be in New York City can shine a light on Mayor Bill and the NYC City Council, I think that the disaster we have voted into office will be clear.

Mayor's Pal Yitzchok Leshinsky and Housing Bridge Are Under Investigation

Mayor Bill Makes A Call To the NYPD, Gets A Friend Set Free and Would Do It Again 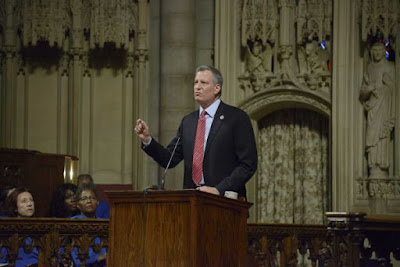 De Blasio aide warned about shady businessmen in NYPD probe
By Michael Gartland, Shawn Cohen and Bruce Golding
April 15, 2016 | 3:26am
A top aide to Mayor de Blasio had warned against putting the businessmen now at the center of the NYPD corruption scandal onto Hizzoner’s 2014 inaugural committee, The Post has learned.
But Avi Fink was blown off by de Blasio’s chief fund-raiser — whose campaign-finance work is under investigation — and also by the committee’s chairwoman.
Fink, a mayoral adviser on Jewish issues who is on leave working for Hillary Clinton’s presidential campaign, told Ross Offinger and Gabrielle Fialkoff that he had concerns about Jeremy Reichberg and Jona Rechnitz, sources said Thursday.
“People in the Orthodox community told Avi they had questions about where his money comes from and said he’s not a community activist, he’s only out for himself,” one source said.The red flags included doubts about how Reichberg, a prominent member of the Orthodox Jewish community in Borough Park, Brooklyn, had attained his wealth, sources said.
Another source said Rechnitz was well-known in the Bukharan Jewish community in Queens for clashing with Israeli billionaire and diamond merchant Lev Leviev over a business deal.
“He had a falling out with [Leviev] that may have tarnished his reputation,” the source said.
Offinger and Fialkoff, a jewelry heiress who now holds a $203,000-a-year City Hall job, let them join the committee anyway.
Perks of a committee appointment included seating at the Jan. 1 inauguration ceremony and a spot on a receiving line to congratulate the mayor, as well as an invitation to a Gracie Mansion breakfast the next Sunday.
Rechnitz and his wife each donated the maximum $4,950 to de Blasio’s campaign, which the mayor has said he would return.
After de Blasio’s election, Reichberg hosted a fund-raiser at his Borough Park home that raked in $35,000 for the Campaign for One New York, the mayor’s now-defunct nonprofit.
Fink, Offinger and Fialkoff — who runs the de Blasio-created Office of Strategic Partnerships — did not return calls for comment.
A de Blasio campaign spokesman didn’t deny Fink’s warnings but issued a statement describing the inaugural committee as “a large, ceremonial group” whose “members were recommended and vetted by campaign staff and chosen by staff in partnership with the volunteer chairperson.”
Additional reporting by Yoav Gonen

The Judge Who Saved New York

Updated Aug. 13, 2015 10:35 p.m. ET
109 COMMENTS
LINK
A meteor headed straight for the world’s financial center has been knocked off course. Federal Judge Katherine Polk Failla of the Southern District of New York has prevented catastrophe in Gotham by knocking out the city’s 2012 Responsible Banking Act. The benefits will be felt far beyond New York.
The idea behind the law was to pressure banks to provide more loans to politically favored borrowers. The plan by the New York City Council was to take an obscure, routine function of approving banks to hold the city’s deposits and use it as leverage to assert a vast authority over lending that even many Washington regulators would envy.
Step one was creation of the Community Investment Advisory Board, charged with collecting data from banks on their efforts to offer services “most needed by low and moderate income individuals and communities.” The board was also deputized to examine what the banks were doing in “affordable housing,” foreclosure prevention, “community development” and other projects that might “positively impact” the city through activities such as “philanthropic work and charitable giving.”
Yes, the progressives who run New York City think it’s their business to pass judgment on private charitable donations. After the board had examined the banks and opined on how socially responsible they were, city bureaucrats were then empowered to use these judgments to determine which firms would be official deposit banks in New York City. The city would put out annual reports essentially grading each bank.
Former Mayor Michael Bloomberg thought this was illegal. Under longstanding precedent, banking regulation is conducted by the feds and states. Federal law states that “no national bank shall be subject to any visitorial powers except as authorized by federal law,” but the council overrode a Bloomberg veto.
The new board created by the law recently started demanding information from banks, including proprietary data that could reflect the health of the bank and involve trade secrets. A number of other big cities, including Philadelphia and Los Angeles, have also sought to enforce “responsible banking.”
Judge Failla found that the Responsible Banking Act is “preempted by federal and state law,” contains “unconstitutional provisions” at its heart and is “void in its entirety.” Under the Constitution’s Supremacy Clause, federal law trumps subordinate laws, so a city cannot simply choose to override national banking policy on a whim.
Mayor Bill de Blasio’s lawyers argued that compliance was voluntary and the city is free to choose which banking services to purchase. But Judge Failla noted that the law had nothing to do with getting a better deal on the city’s checking accounts and everything to do with broad social goals. Cities are free to use their proprietary power to select the best services at the lowest cost, but not to use this as a pretext for unrelated regulation of activity already governed by state and federal law. As for the idea that banks didn’t have to participate, the judge noted that the law “secures compliance through public shaming of banks.”
Good for Judge Failla, Sullivan & Cromwell counsel Robert Giuffra who argued the case, and the citizens of New York City who have been saved from another progressive onslaught.
Posted by Betsy Combier at 7:58 AM