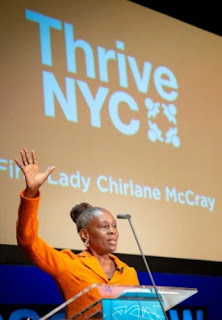 The corruption of New York City Mayor Bill de Blasio and his wife Chirlane McCray just keeps everyone busy, reading all about it.

The waste of money detailed in the latest article posted below cannot be an accident. However, the Mayor does not seems to have any accountability in his office, and/or no one is saying anything.

We just cant wait until someone, somewhere, does something about it,  but there is good news on the horizon, hopefully: a whistleblower of the Special Commissioner of Investigations made a complaint.

See also:
The Non-Thriving ThriveNYC Run By Chirlane McCray is a Scam

Maybe now there will be accountability.

Can a city Mayor be impeached?


A ThriveNYC program costing up to $10.5 million a year uses school “consultants” who deliberately avoid helping students in crisis and serve as glorified “311 operators,” educators and critics say.
The consultants put on workshops and compile lists of outside services, but don’t work directly with kids in distress.
“It’s a Band-Aid on a huge wound,” the principal of a Brooklyn alternative high school told The Post. “It’s an absolute waste of money.”
The principal said her school struggles daily with students suffering from family turmoil, drug abuse and violence, but gets little or no support from the “School Mental Health Consulting Program,” which was launched in 2016 as part of the $850 million ThriveNYC initiative led by Mayor de Blasio’s wife Chirlane McCray.
When a student’s mother was shot to death, the principal turned to her school’s “consultant,” a Department of Education employee, to comfort the traumatized teen.
“Is it possible you can step in and help?” the principal asked the employee.
“We’re not allowed to give any direct services,” the consultant replied, according to the principal.
Each consultant makes $58,381 to $79,694 a year, and their supervisors $69,000 to $95,611.
Councilman Mark Treyger, education committee chairman, told The Post: “They were getting exorbitant salaries for doing the work that 311 operators already do — referrals.”
Instead of offering sorely needed direct services such as counseling, the consultants plan and give workshops on topics such as recognizing signs of mental illness and suicide-prevention tips.
“All they really do now is sit with the principals and create a plan to come and do a workshop for staff, students or parents,” the principal said.
The workshops are okay, but superficial, she added. “We’re so beyond naming the issues. The problem is getting the resources and support for dealing with the issues.”
The consultants also compile lists of local hospitals and agencies that provide counseling and treatment, but leave it up to the school or students to get them, the principal said.
“They were supposed to be building partnerships with agencies to serve our schools, but that never happened. We didn’t partner with anybody.” 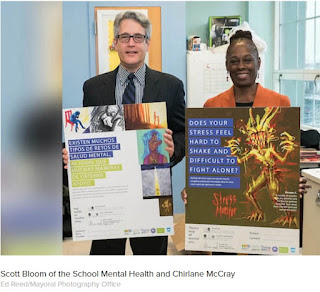 The program was “set up as a light touch,” Scott Bloom, the DOE’s director of mental health, explained in a memo to staff.
“It was never designed to be a student-centered service nor a first responder for crisis situations,” Bloom wrote, adding the program is “best utilized as a secondary responder — after the school’s support team or DOE Crisis Teams respond to the situation and have the situation under control.”
Bloom called it “post-vention.”
The ThriveNYC program, a collaboration between the city Department of Health and Mental Hygiene and the DOE’s Office of School Health, started in FY 2016 with 100 consultants and 11 supervisors for 950 schools.
That’s down this year to 73 consultants and eight supervisors. They now cover 820 schools. Some consultants were “moved out of schools where DOE has introduced other services,” officials said.
Officials did not list which of the city’s 1,800 schools get the consultants, saying they go to those without staff dedicated to mental health — about half of them elementary schools.
“It’s clearly not helping students in crisis, or helping school staff respond to and prevent further crises,” said Dawn Yuster, school justice director with the non-profit Advocates for Children. “That’s what we’re hearing from school staff.”
The DOE’s crisis teams are ill-staffed and often fail to promptly respond to students in meltdowns, Yuster said.
That leaves many school administrators no choice but to call 911 for an ambulance to haul the student to a hospital ER, or for cops to forcibly remove the child.
In 2016-17, schools called the NYPD for 2,702 incidents of “students in emotional distress” — half aged 4 to 12, an Advocates for Children analysis found. In 330 cases, cops clamped handcuffs on kids, some as young as 5.
And the problem has worsened. In 2018-19, the NYPD intervened in 3,547 incidents of kids in distress, the latest data show.
“We get calls all the time from schools at a loss for what to do,” Yuster said. “Students end up getting removed from class, missing work, punished or sent home.”
Several DOE insiders said the ThriveNYC funds could be better spent giving intense support to kids in districts or schools who need it most.
“It’s a question of targeting the resources instead of just increasing the budget for a jobs program and throwing money at the problem,” said Stephen Eide, a social-policy expert at the Manhattan Institute think tank.
D.J. Jaffe, an expert on mental-illness policy, agreed the program has little impact.
“Educating people about mental health is not the same as delivering services to the ill,” he said. “We need more services. We don’t need referrals to services that are already maxed out.”
McCray should know. In 2015, before launching ThriveNYC, she penned an op-ed describing the difficulty she faced in finding help for daughter, Chiara, then 18, who revealed she was suffering from anxiety, depression and addiction.
The family eventually found the right doctors and therapists for Chiara, leading to her recovery, McCray wrote, but she realized the mental health system is broken — “especially for those who don’t have the same advantages as us.”
In response to pressure by Councilman Treyger and  Manhattan Borough President Gale Brewer, the city’s FY20 budget now includes $10.9 million in new funding for a School Crisis Responder program with 85 social workers.
ThriveNYC spokesman Joshua Goodman said the DOE is beefing up services for troubled youth.
“Today, there are new mental health clinics and clinicians in hundreds of schools, new teams of social workers who respond to crises, and expanded training for teachers on how to address the mental health needs of their students,” he said.
Posted by Betsy Combier at 8:09 PM No comments: