Mayor Bill de Blasio was forced to make an embarrassing apology to the loved ones of those killed in last year’s West Side Highway terror attack — when he forgot to honor the victims at their own memorial.
Hizzoner and other top officials held a ceremony Wednesday marking the one-year anniversary of the Lower Manhattan attack, when “bike path terrorist” Sayfullo Saipov allegedly killed eight people by plowing a truck into cyclists and runners along the thoroughfare.
Survivors and family members of those killed were in attendance, but the mayor didn’t mention the victims’ names or say anything about who they were — initially opting only to praise the first responders.
After the 15-minute ceremony, de Blasio began shaking hands with the families — then suddenly hurried back to the podium, revealing that someone had called him out on the omission.
“I apologize. This should have been part of the gathering to read the names of the eight that we lost,” he told the crowd.
“So I want to right that wrong with apologies and do that now and ask everyone to bow their heads as we remember each of them.”
De Blasio then read the names of the victims — Diego Enrique Angelini, Nicholas Cleves, Ann-Laure Decadt, Darren Drake, Ariel Erlij, Hernan Ferruchi, Hernan Diego Mendoza and Alejandro Damian Pagrucco — and bowed his head.
It wasn’t the only insult to the families: The mother of at least one victim was only told about the memorial on Tuesday afternoon and missed the event, according to a friend.
“It is so traumatic for her to be in the city today that she is in the Boston area and wasn’t told about this memorial service until 4 p.m. yesterday,” Hugh Hales-Tooke, a friend of Cleves’ mom, Monica Missio, told The Post.
“She’s very hurt. She was very hurt.”
Hales-Tooke blasted the mayor for ignoring Cleves and the other victims in his address.
“I didn’t hear a thing about the lives, the people. Nicholas Cleves was born and bred in New York. He loved this city. His mother’s destroyed by this,” he said.
“I thought that was what this was about, that this is a moment where we would say … ‘You know, we care, we really do care,’ but I didn’t get the feeling. [The mayor] said this attack has been in our hearts for a year … Really, do you believe that?”
It wasn’t the first time de Blasio offended family members at a mass tragedy memorial. In 2014, he infamously showed up late to the anniversary of the 2001 American Airlines Flight 587 crash in Queens, missing altogether the moment of silence for the 265 killed. 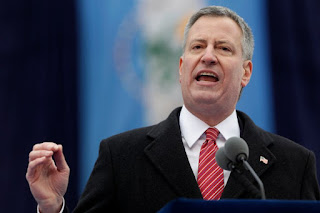 
A mourner at a memorial for the West Side Highway terror attack on Wednesday refused to shake Mayor Bill de Blasio’s hand — after the city only let loved ones know about the event at the last minute.
Hugh Hales-Tooke stared straight ahead and refused to acknowledge de Blasio’s presence as Hizzoner stuck out his hand while greeting those gathered to grieve the eight people mowed down by a truck-driving terrorist on the pathway a year ago.
Hales-Tooke said his friend Monica Missio, whose son Nicholas Cleves died in the massacre, missed the event because she was only told about it late Tuesday afternoon and was out of town.
“She’s very hurt. She was very hurt,” he told The Post.
Adding insult to injury, de Blasio then forgot to read out any of the victims’ names during his address at the service — despite managing to name-check all of the politicians who showed up.
When family members objected after the memorial, the mayor returned to the podium to apologize for the faux pas.
Posted by Betsy Combier at 5:53 PM